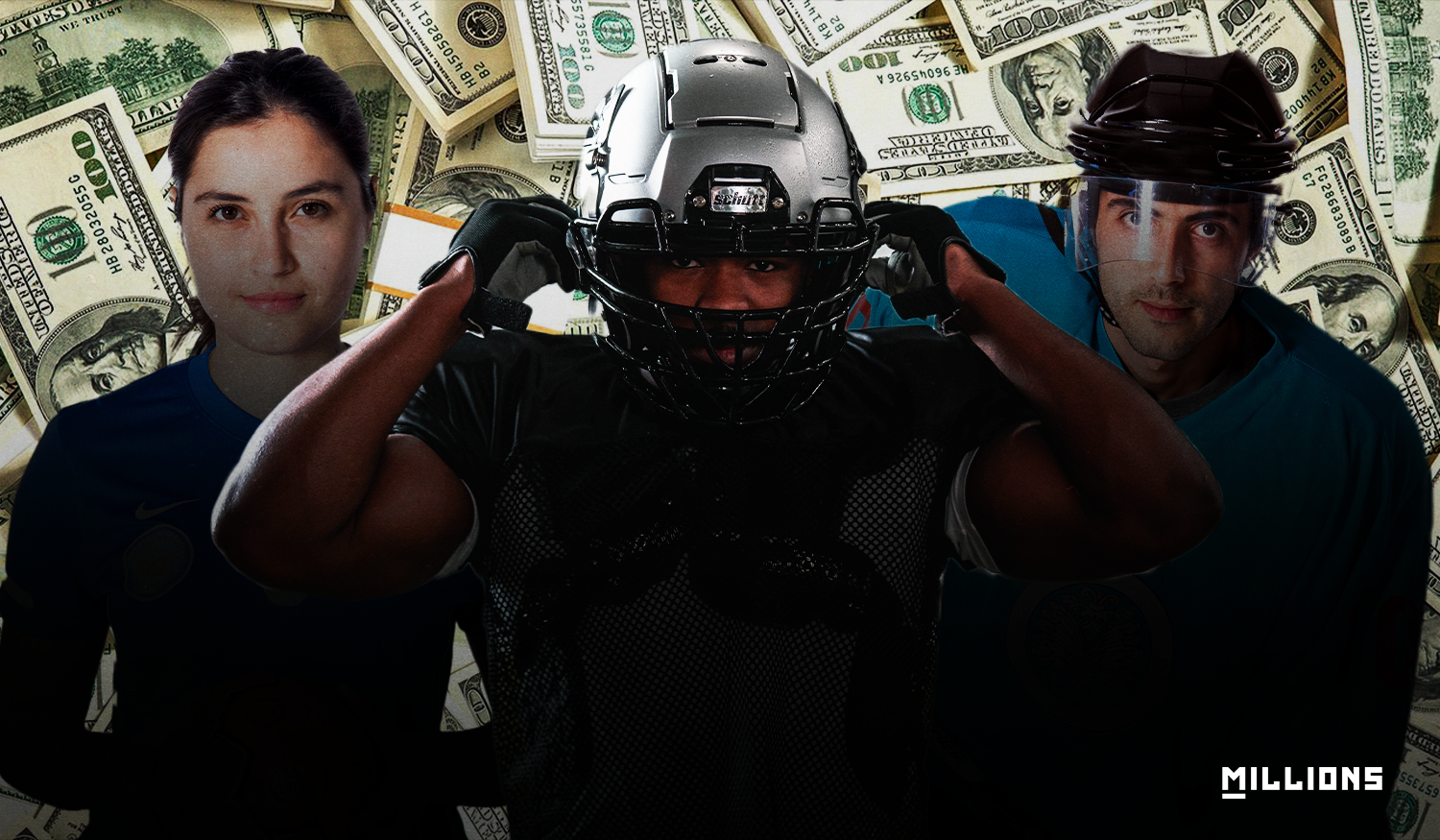 Whether college athletes should be paid has been debated for decades. The answer from the National Collegiate Athletic Association (NCAA) has always been a firm “no.” Made up of college presidents, athletic directors, coaches, faculty liaisons, and many more, the NCAA has long held the position that college athletes are amateurs and thus prohibited from earning income aside from scholarships, receiving no compensation of any kind.

The Supreme Court had a different view: Limiting education-related compensation was a violation of the Sherman Antitrust Act of 1890. The NCAA, seeing the writing on the wall, then voted to allow athletes to be paid for use of their names, images, and likenesses (NIL). After all, the NCAA enjoyed a nice revenue of $1.16 billion in 2021, 60% of which goes back into schools and conferences. For many schools, though, that money from the NCAA is a drop in the bucket. Of the top 20 earners, the University of Texas came in at number one in 2018-2019, earning $223,879,781 off its college athletics programs, with the University of Arkansas at number 20 with $137,497,788.

Not all colleges earn this much off athletics (some lose money), and until now, college athletes could earn nothing.

College athletes can now profit from their names, images, and likenesses by signing advertisement or licensing deals with brands or service providers, monetizing social media, getting in on the NFT game, getting paid for autographs, starting a business, teaching or coaching others, and so on.

Colleges can’t pay their athletes directly, even for NIL rights. There’s no federal law governing NIL activities yet, but some states (at least 28 as of the end of 2021) have passed laws to fill in the gap. Most require NIL agreements to comply with contracts between the student athlete and the school, and payment cannot come from conferences and associations, either. So-called vice industries (alcohol and tobacco, for example) and any association violating a school’s “values” are off limits.

Before we get into this discussion, it’s important for college athletes to remember a few things:

How can college athletes take advantage of the new NIL rules?

Under NCAA rules, “student-athletes must be compensated only for work actually performed.” In other words, a student athlete has to do something to earn compensation. Compensation cannot be based on “athletic participation or achievement.” One more caveat before we get to the good stuff: Students need to be aware of tax laws regarding NIL compensation.

Now for the good stuff. How can athletes leverage NIL to make money?

For those athletes who want to earn money on their names, images, and likenesses (even to benefit others), there are some key opportunities for doing so.

First, though, athletes can get started by partnering with an organization like MILLIONS.co, attending the NIL Summit in June 2022, or working with one of the many agencies that have sprung up to help athletes educate themselves and market their brands, or a advising/consulting-oriented service like NIL Network.

Colleges are replete with sporting events. The Wikipedia page on “Annual college sporting events in the United States” lists 28 subcategories of major sporting events, most with their own subcategories. Everything from championships to tournaments in men’s and women’s sports is listed. And don’t forget homecoming traditions that remain popular across the country. In other words, there are events that student athletes can leverage for NIL revenue.

However, the biggest events offer unique opportunities for athletes to cash in on NIL earnings.

College Football and the Playoff Series

Football reigns in college sports. And, college football brings in the most money of college sports—on average, $31.9 million a year. Television contracts bring in much of that revenue, but the playoffs present opportunities for student athletes to tap into the market.

NCAA’s basketball tournaments for men and women, known as March Madness, bring in as much as 85% of that $1.16 billion the NCAA takes in. Brands spent $910 million on advertisements in March Madness 2021.

How can students take advantage of these money makers?

First of all, by not overstepping. Athletes will want to work within their own college’s rules governing NIL before some sort of uniformity is introduced. Here are the major ways student athletes can take advantage of events and promote themselves every day. The big events are prime earning opportunities, but some athletes are making the most of NIL rules year round.

Student athletes can follow a traditional path and contract with brands or businesses to appear in advertisements. Well-known athletes can leverage their NIL to promote products like sportswear, food and drink, activities, events, and so on. But an athlete doesn’t have to be known on a national level. Athletes can take advantage of local markets, too.

Athletes can build their brands through social media and even get in on the influencer gig. Video marketing and live streaming are both lucrative avenues to some extra income. Touting a brand as either an affiliate or by sponsorship can both add to a student athlete's earnings. Student athletes can even offer premium content through social media outlets, making the most of their own talents and knowledge to offer services such as fitness classes, sports camps, or behind-the-scenes glimpses into the life of a college athlete.

We have become so accustomed to online life, especially with the advent of COVID, that we forget we can still live in the physical world. Activities that work online—fitness instruction or sports camps—can work in the “real world,” too! Again, an athlete doesn’t have to be nationally famous. A local “hometown hero” can generate interest in shared wisdom and skills. A student athlete can build a future by becoming an entrepreneur.

Autograph signings are another earnings avenue. After college, athletes experienced with NIL may even want to make a career out of it.

Some college athletes have opted to use their NIL power in another way: benefiting charities. One example is Kenny Pickett, quarterback for the University of Pittsburgh. Two of Pickett’s NIL deals provide funding for Boys & Girls Clubs of Western Pennsylvania. The deal has given Pickett an opportunity to support a cause important to him, along with volunteering his own time to the organization. According to BBMG, “Gen Z is 3X more likely to say that the purpose of business is to ‘serve communities and society’” than simply produce goods and services for consumption. Other college athletes are joining the movement to give back, and we can expect to see more of that via the NIL ruling.

Opportunities do exist, especially for top players or players who stand out in the play. Entities like the Dollar Shave Club, Yahoo Sports, Topps Trading Cards, and Bose, among others, have inked deals with college athletes.

Kenny Pickett has shown us one way college players can make good on NIL. But, Bryce Young (University of Alabama quarterback) is said to have sponsorship deals worth nearly $1 million, having squared away deals with BMW of Tuscaloosa, Cash App, Subway, and Logan’s Roadhouse.

One of the most interesting deals in college football were Kayvon Thibodeaux’s (Oregon, now NFL)  NFT deal and McKenzie Milton’s (Florida State) NFT offering, an indication of the range of opportunities for athletes out there. Wisconsin’s Graham Mertz went a more traditional route, developing his own logo to trademark a clothing line. D’Eriq King (Miami) sells signed memorabilia from his own online shop. Will Ulmer of Marshall plays live music, promoting himself on Twitter.

But it’s not just the “big names” brokering deals and profiting off the NIL ruling. The New York Times reports “tens of thousands of athletes” have deals with brands. The deals may often net smaller revenues, but most people who have been struggling college students won’t scoff at $1000.

Adrien Nuñez, University of Michigan guard, landed deals with Amazon, Coach, and Spotify mainly because of his social media success—with 3 million+ TikTok followers. The success of Nuñez illustrates the importance and power of social media activity for student athletes.

Women are benefiting from the new NIL rules in ways that perhaps no one expected, and maybe more so than male athletes. According to Opendorse (via Bizwomen), “women’s basketball is second to football in the percentage of total NIL compensation by sport.”

Basketball player Sedona Prince (University of Oregon) sees NIL as a way to secure her future. Prince has a TikTok following of 3.1M, and her TikTok page has garnered more than 90M views. She’s also active on Instagram with 260+K followers, and on Twitter with 44+K followers. She has partnered with brands like Wasserman and coffee company Riff, serving the latter as Chief Community Officer, and she now owns equity in the business, as well. Prince has even launched her own line of merchandise. She’s known for raising awareness of the inequality women face in sports and supports others looking to benefit from NIL.

Haley and Hannah Cavinder of Fresno State, twin basketball players, have deals with Boost Mobile and Sleeper fantasy sports app, among other brands. University of Nebraska’s volleyball star Lexi Sun has partnered with Borsheims to create a jewelry collection and designed a sweatshirt for REN Athletics. Jada Williams (basketball) made a deal with Spalding at age 16 before even reaching UCLA.

Expressing expectations of earning less income in their sports and knowing their time is limited, college women athletes realize the benefits of cashing in on their talents now and investing for their futures.

A platform any student athlete looking to get in on NIL revenue should consider is MILLIONS.co. MILLIONS works with athletes to set up WatchParties, personalized videos, and their own branded merchandise.

University of Miami quarterback Jake Garcia is active on MILLIONS, where he answers questions about training in short form videos and sells his own merchandise. Ditto for University of Pittsburgh running back Izzy Abanikanda, whose merchandise includes playful “Izzy Gets Busy” and “Izzy 2 the Hizzy” themed t-shirts and sweatshirts. Basketball player Larry Moreno (St. Francis Brooklyn) combines an impressive social media following (nearly 500K on TikTok and 75K on Instagram) with a presence on MILLIONS to benefit from his NIL.

Whether it’s partnering with sponsors, supporting charities, developing products, or putting out NFTs, college athletes have shown incredible energy and creativity in marketing their names, images, and likenesses. Leveraging social media and platforms like MILLIONS, athletes are taking advantage of the new rules and finally reaping the benefits of their hard work and talents.

END_OF_DOCUMENT_TOKEN_TO_BE_REPLACED

How to Leverage Influencers on Social Media Platforms

As digital marketing continues to expand into 2022, social media marketing has...

END_OF_DOCUMENT_TOKEN_TO_BE_REPLACED

Sponsoring athletes and paying for endorsements is a no-brainer for brands looking...