Song Yadong went into his UFC Fight Night bantamweight bout against Marlon Moraes chasing a highlight moment saying ahead of the fight, “I think I have the ability to do that."  Well he caught it and it came in the form of a first round uppercut that sent Moraes to the mat for a short nap, with no follow up shots needed.

Song says he went into the fight with a slightly different strategy, “I planned for defence mostly, but I felt there was a chance so I had to catch it.”  He showed his opponent a lot of respect after the fight too, “I’m happy and I feel sorry because Marlon is also a good fighter.”

Song went into the fight ranked 14th in the bantamweight division and now he could crack the top ten, a goal he’s been focused on achieving for his home country.  “I would be the first male of Chinese ranking top 10 in UFC. And I’ll challenge for even higher ranks,” Song told MILLIONS.

Song knows exactly who he wants to fight next and didn’t need a translator to tell the world “I want to fight next Dominick Cruz, I have a lot of respect for him, but I want a fight with him, let’s go!”

At just 24-years-old Song’s future in the division couldn’t be brighter and a fight with Cruz would be a pretty cool ‘rising star fights idol’ story.

You can support Song by buying his merchandise and you can follow his fight journey by keeping an eye on the MILLIONS blog. 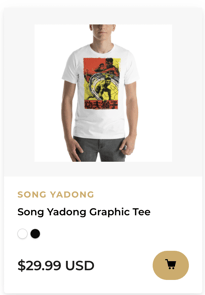 Love him or hate him, MMA fans will be seeing a lot more of Bryce “Thug Nasty” Mitchell.  For...

END_OF_DOCUMENT_TOKEN_TO_BE_REPLACED

Bryce “Thug Nasty” Mitchell didn’t get the finish, but it may have been the best...